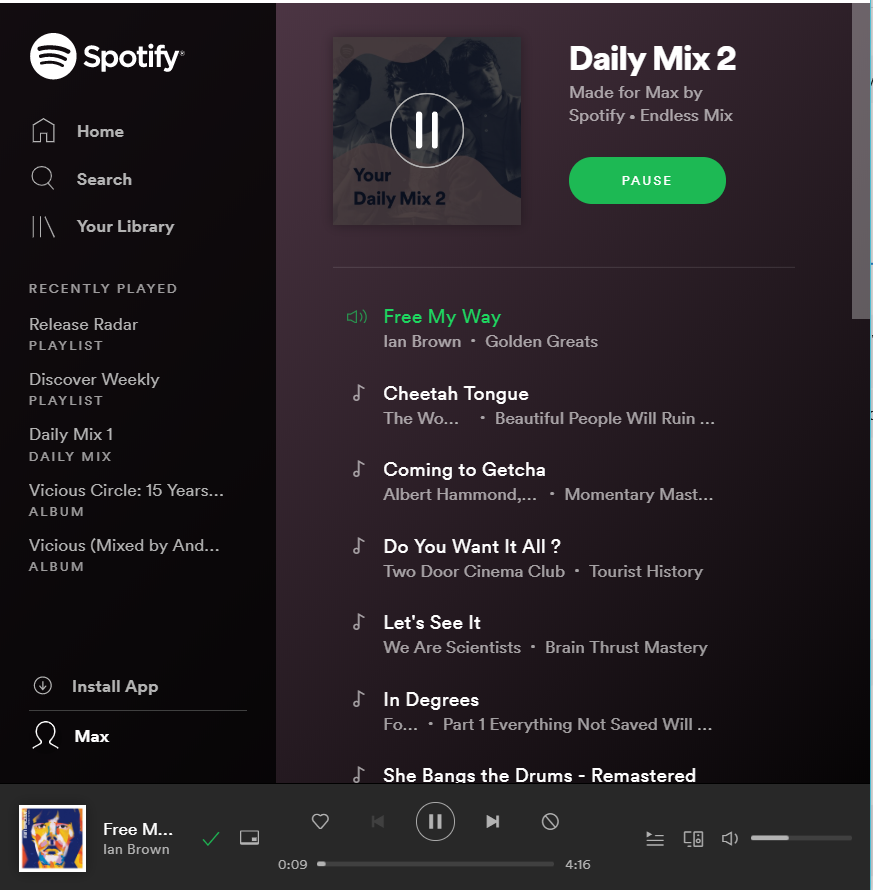 You can 'Like' a song on Spotify by clicking the heart icon next to its name. Your 'Liked' songs are then saved into two playlists, so that you always have easy access to them.

Spotify makes a big success in music field. When people is thinking of listening to the music, Spotify would be the first or the second option raised in mind. With the Spotify music streaming service, people is able to listen to any song whenever they want, for as many times as they want. Launched in 2008, Spotify originated in Sweden and has expanded to European and United States markets these years. As of July 2015, it has gained 75 million active users worldwide and over 20 million paid subscribers worldwide, and the number is still increasing. No matter whether you have subscribed to Spotify or have not made decision to take a try, you would have some ideas on Spotify. Let's take a look to see the advantages and disadvantages of Spotify. You may find what you miss in the past and have a better understanding of the Spotify music streaming service by reading the article.

Why Love Spotify? The Advantages of Spotify

There are so many reasons to love Spotify. It makes the the listening experience become better and the access to music songs much easier. Here lists some main advantages of Spotify. It is not hard to imagine why Spotify becomes a part of the life of millions of people all over the world.

1. Spotify works on various of platforms.Spotify covers all the popular platforms that you could enjoy Spotify music on nearly all your portable devices you have, of course, including the computer. As of May 2015, Spotify is available for Android, BlackBerry, Boxee, iOS, Linux, MeeGo, Microsoft Windows desktop, Openpandora, OS X, Roku, S60 (Symbian), Samsung Smart TV, Sonos, HEOS by Denon, PlayStation 4, PlayStation 3, Squeezebox, Telia Digital-tv, TiVo, WD TV, webOS, Windows Mobile, and Windows Phone.

Note: it is not available as a Windows Store app for Windows 8.

2. Spotify is really simple to use.It allows users to listen to any song whenever they want, for as many times as they want. Organizing the playlists or searching for individual tracks, artists, and albums are super easy too. What will you ask for more? The biggest advantage of Spotify is simple which lets you play just about any song instantly without having to purchase or download it from store.

3. Spotify offers free subscription.Unlike other similar music streaming services, such as Apple Music, Pandora, Spotify offers free subscription plan for users to access Spotify music for free. That means people don't have to pay before enjoying the millions of songs. It is good for those people who has basic need on music. If you want to upgrade the plan, you still have 30-days trial to decide whether to subscribe to Premium plan or not.

4. Spotify has large music catalog.There are at least 50 million songs in Spotify. That means you're very likely to find all, or nearly all, of the songs you could want to stream in Spotify. Spotify cares your taste and helps you find the new music and organize the music you love. You are able to build playlists that span all kinds of themes, from movie soundtracks and music festivals to party and road trip tunes. Yes, you can share with your friends and get followers. It is definitely social-oriented.

What You May Dislike Spotify? The Disadvantages of Spotify

1. The free plan of Spotify has limitation. It is quite easy to understand. To distinguish the free plan and the Premium plan, Spotify sets limitation on the free plan to ensure that it would not affect the company's profit, after all, Spotify is a commercial company. Advertisements in the free service can be intrusive. With a free account, you can only shuffle songs in the mobile apps. The sound quality is lower, with 160kbps quality comparing to 320kbps in Premium service.

2. The song can't be downloaded even with the Spotify Premium plan. By subscribing to Spotify Premium service, you are able to enjoy Spotify music offline with the device that installed Spotify app. However, if you need to listen to Spotify music on your music player, you are out of luck. Spotify does not offer an option to download the music as MP3 files. Thus many people asked how to extract MP3 audio from Spotify for freely enjoyment or other questions like that.

Like or Dislike Spotify? Some Tips that You Need to Know

Although Spotify has millions of users worldwide and gained good reputation, it doesn't mean you must love it like somebody else. We listed some advantages and disadvantages of Spotify music streaming service above to help you understand it better. Judge it by yourself and decide to try or not according to your needs.

Tip 1: If you upgrade to the paid services, you'll be paying every month regardless of whether you use the service or not. You have the ability to listen to the songs, but not owning them. If you don't listen to music too much, it may seem to be a waste because you should pay $120 per year for the Premium service, that's roughly 10 to 12 albums you could buy from a vendor.

Tip 2: To freely download the Spotify songs to your computer or play on any music player, we recommend Sidify Music Converter which acts as a Spotify to MP3 convertr, Spotify music to AAC converter and Spotify music to WAV converter, etc. It removes DRM from Spotify and frees the Spotify songs in lossless quality in MP3/AAC/WAV/FLAC format at fast conversion speed, keeping ID3 tags. Downloading is free. To use the full version, buy it now at $39.95.

How Many Tracks Can I Download From Spotify
Download Music Onto Fossil Watch Spotify
Comments are closed.